Mrs Elton (Emma) famously said that she thought 'there is something direful in the sound' of Birmingham, but if you explore Birmingham Museum and Art Gallery, you'll discover some wonderful treasures from the world of Jane Austen's England.
Much of the stained glass in Britain's churches is of Victorian date, some of which is splendid, but some is of rather dubious taste. Apparently many Georgian-era stained glass windows were removed by Gothic revivalists, but the museum holds some extremely rare survivals.
These two windows, 'Charity' and 'Justice', date about 1816, were painted by William Eginton, and I think they are really beautiful.

Birmingham was famous for its 'toys' or trinkets, and Matthew Boulton began his early career as a 'toy'-maker.This little 'taperstick' would have held a candle; the fish was a spicebox or vinaigrette.
This wine glass (right) is hand-blown, and typical of the period.
And what Georgian home would be complete without some beautiful china?
This is a Meissen coffee-cup and tea-cup from the 1750s (too early, I know for Jane Austen, but they are really pretty. Maybe Mr Woodhouse had an old set for when his friends and neighbours came for tea). 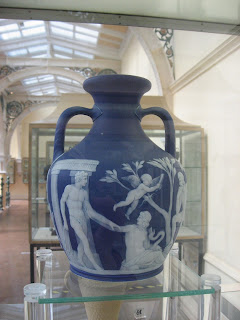 This vase (right) is a copy of the famous Portland vase, and is one of the masterpieces which made Josiah Wedgwood famous. 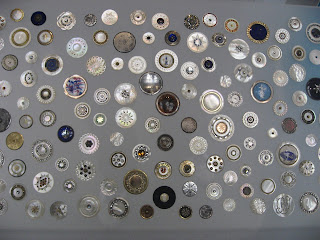 Last, but not least, we have some Birmingham-made pearl and metal buttons, dated 1780-1820s, and another product which the city was famous for.

I hope you all had a lovely peaceful Christmas and New Year! What better way to beat those January blues than a competition! You could win a free signed copy of my new book Regency Spies on Goodreads! The competition ends on 10 February 2016; it's open to UK residents only.