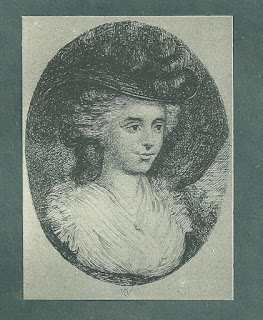 Fanny Burney (1752-1840) is one of the literary ladies I'd most like to visit, if I could go back in time (apart from Jane Austen, of course). In particular, I'd like to do the 18th-century equivalent of an 'intervention' and free her from her father's overbearing critical influence.
Fanny (Frances) began writing in an age when it was considered unseemly for a lady to dabble in novel or play-writing, and when a teenager she burnt all her early writings, which is a great pity for posterity. Nevertheless, greatly daring, she published her first novel anonymously in 1778. Evelina was an overnight success, and four years later, Cecilia appeared. This novel about the trials and tribulations of an heiress probably inspired the final title of Jane Austen's Pride and Prejudice. In one scene a character says,'The whole of this unfortunate business...has been the result of pride and prejudice'.
However, Fanny's novel-writing career came to an abrupt halt when, following family pressure, she agreed to take a post in Queen Charlotte's household. She kept a diary, which is wonderfully evocative of the age. But the endless, boring routine of the royal court actually made Fanny ill, and eventually she resigned her position.
Fanny met the love of her life, General D'Arblay, shortly afterwards, and they married in 1793; they had a little boy the following year. Now restored to happiness, Fanny began work on a new novel, Camilla (1796); Jane Austen was one of the subscribers.
A real survivor, Fanny lived through the Napoleonic Wars (she was in Brussels during Waterloo), and famously endured a mastectomy without anaesthetic. After living to the grand old age of 87, she was buried at St Swithin's Church, Walcot, in Bath. 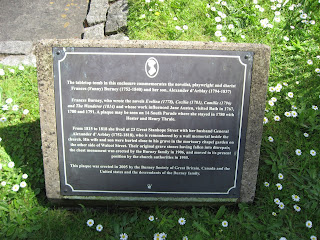 Jane Austen was a great admirer of Burney's works, and in a famous passage in Northanger Abbey, she defends the novel from its detractors: '"And what are you reading, Miss — ?' 'Oh! It is only a novel!' replies the young lady, while she lays down her book with affected indifference, or momentary shame. "It is only Cecilia, or Camilla, or Belinda; or, in short, only some work in which the greatest powers of the mind are displayed, in which the most thorough knowledge of human nature, the happiest delineation of its varieties, the liveliest effusions of wit and humour, are conveyed to the world in the best–chosen language'.