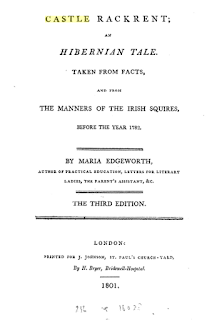 Jane Austen refers to several female authors in her novels and letters. One author she particularly admired was Maria Edgeworth, one of the most famous writers of her day. In a letter to her niece Anna Austen (later Lefroy) in September 1814, Jane wrote, ‘I have made up my mind to like no novels really but Miss Edgeworth’s, yours, and my own’ (Anna was writing a novel).
Maria was the daughter of Richard Lovell Edgeworth, an Irish politician and writer who also found the time to sire 22 children (he was married four times). She was born in Oxfordshire, but later moved to where her father’s estate at Edgeworthstown. Maria helped her father with his tenants, and also collaborated with him on an educational work for children.
Her first novel, Castle Rackrent (published anonymously in 1800), was a polemic on grasping Irish landlords. Another of Edgeworth’s novels, Belinda, was mentioned by Austen along with Fanny Burney’s works in her famous defence of the novel in Northanger Abbey. 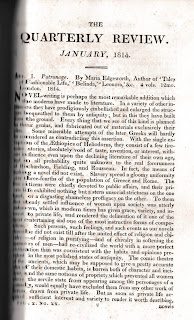 Edgeworth’s urge to educate her readers, however praiseworthy, did not please the gentleman (possibly John W. Ward) who reviewed her 1814 novel Patronage for the Quarterly Review (January 1814). He praised her ‘remarkable talent for humour’, but ‘in the first and one of the most material branches of novel-writing, that of framing a story, she is remarkably deficient...there is too much downright lecturing’.
Maria Edgeworth never married, and lived to a ripe old age.

Another popular author of Austen’s day was Mary Brunton (1778–1818); her novels Self-Control (1811) and Discipline (1814) were widely read. Mary (nee Balfour), who was born in Orkney, eloped with a clergyman at the age of twenty; they were happily married. Mary died at the untimely age of forty, leaving an unfinished novel, Emmeline. 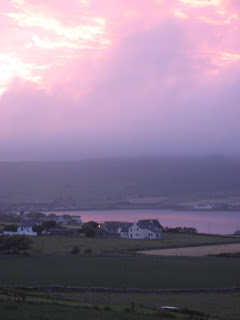 When Self-Control was published, Jane Austen wrote to Cassandra that she was anxious to get hold of a copy, but had failed. Evidently she eventually managed to find one, because in October 1813 Jane wrote to Cassandra, ‘I am looking over Self -Control again, and my opinion is confirmed of its being an excellently-meant, elegantly-written work, without anything of nature or probability in it. I declare I do not know whether Laura's passage down the American river is not the most natural, possible, everyday thing she ever does’.
Images:
Title page of Castle Rackrent, courtesy Google Books.
Review of Edgeworth’s novel Patronage in the Quarterly Review, January 1814. Author’s collection.
An Orkney sunset. © Sue Wilkes.

Sue Wilkes
I'm the author of several social history books and family history guides. My new book, Tracing Your Manchester and Salford Ancestors, for Pen and Sword, is out now. I'm a member of the Society of Authors and a Fellow of the Royal Historical Society. I write for adults and children. I like toast, crisp clear autumn mornings, and haunting secondhand bookshops. Je suis Européenne.