A Visit to Lyme Regis

'The young people were all wild to see Lyme...the remarkable situation of the town, the principal street almost hurrying into the water, the walk to the Cobb, skirting round the pleasant little bay, which, in the season, is animated with bathing machines and company; the Cobb itself, its old wonders and new improvements, with the very beautiful line of cliffs stretching out to the east of the town, are what the stranger's eye will seek; and a very strange stranger it must be, who does not see charms in the immediate environs of Lyme, to make him wish to know it better', (Persuasion).

In Jane Austen's day, the most respectable houses were in the upper part of town. 'To be a person of consideration in Lyme, it is necessary to toil up hill, and to fix one's abode where it is in danger of being assailed by every wind that blows', (John Feltham, A Guide to all the Watering and Sea-bathing Places for 1813, London, 1813). The houses in the lower part of town were rather 'mean', with 'intricate' streets.

The Golden Lion and Three Cups were the most respectable inns, and lodgings could be procured there 'on easy terms'. Lyme also boasted a 'small Assembly-Room, Card-Room, and Billiard-table' under one roof, and several bathing-machines. The beach was considered too pebbly for pleasant walking. Feltham was also rather sniffy about Lyme's libraries, which were 'neither copious nor select' and the book collections were 'principally composed of novels'.

The Cobb was Lyme's 'harbour of a most singular construction...where ships ride in perfect safety'. And of course Anne Elliot, Captain Wentworth and the Musgrove girls enjoyed walking along it - except on the day of Louisa Musgrove's accident: 'There was too much wind to make the high part of the new Cobb pleasant for the ladies, and they agreed to get down the steps to the lower, and all were contented to pass quietly and carefully down the steep flight, excepting Louisa; she must be jumped down them by Captain Wentworth'. 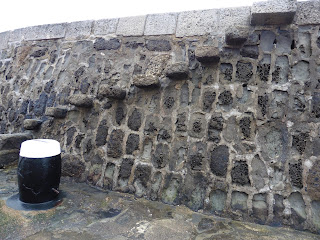 But which steps did Louisa fall from? For my money, these horribly gappy ones (left) look like the obvious candidate. 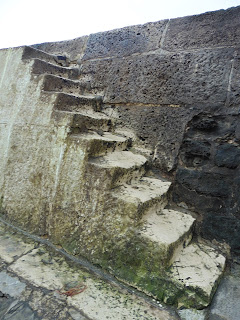 However, there are some very ancient-looking ones (right) near the end of the Cobb which could also be the steps which Jane Austen meant (and which look easier to jump a young lady down from).

There are some nice Regency-era houses on Marine Parade, but they were probably built after Jane Austen's visits in 1803 and 1804.